Even and Odd Street AND Top 10!

I have learned in the past 3 weeks of my life that first and second graders are wooooooooorlds apart when it comes to their levels of independence as well as their depth of understanding. It is not easy to teach first and second grade in one big group! At my school, we only split up Math and Reading. Right now, I'm teaching the first grade writing curriculum to the whole group because I know my second graders didn't write last year. 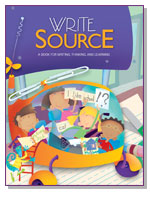 Does anyone else use Write Source? I like it so far! It is pretty straightforward and I think the kids are getting it.

Anyway, the point of that whole story was that there are a LOT of things that the second graders know like the back of their hands, and the first graders have nooooo clue what I am talking about. One example of this is even and odd numbers. The second graders have them memorized while the first graders are lost. So, when I saw The Teacher Wife's post about Even and Odd Street, I fell in love!! [Also, I think I've said the phrase "Even and Odd Street" to my boyfriend about 2839749875 times in the past two days... he's probably relieved that I did this so quickly, haha!]

We did this today, and my kids fell in love too. 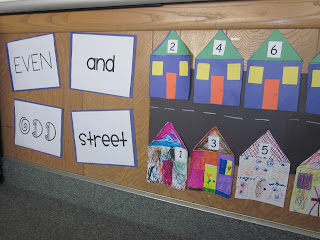 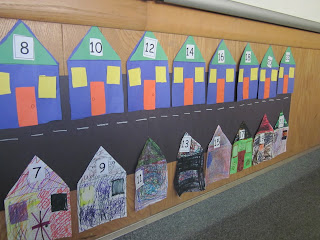 I didn't put them up on the street until after school, so I'm pretty sure they are going to freak out when they come in tomorrow morning. I used the printables that Lindsey shared and just copied them onto construction paper for the Even Houses. Then for the Odd Houses, I just copied the template on regular paper. We talked about what "odd" means, and then I told them to make the weirdest house they ever saw! Mainly they just scribbled but they were super proud of their work. During afternoon wrap-up, they all said that was their favorite part of the day - making the houses. I hope they use Even and Odd Street as a resource throughout the year!!

Okay, onto the second part of my post... top 10! Mechele from Barrow's Hodgepodge listed me in her top 10 list!! That was a shock to me because I am so new! :)

I'm pretty sure that everyone I will mention has already received the Top 10 award.... but oh wells. :) I will just name a couple!!

I just started following Lindsey like two days ago and I already love her! She offers lots of free things and has awesome ideas!! And I love her blog design too.

Meredith is awesome. I feel like she is down to earth and nice in real life! Also she has been so very supportive of me, especially lately in my math work stations dilemma. And I got the tissue paper flowers idea from her, which really brightens up my room!

Everybody loves Hadar!! She is super nice and leaves me comments sometimes. I love her DIY ideas and I love her signs (which I think I've said a million times). She is also very funny! I keep thinking I should make my introduction video so I can join her linky party....... maybe I will tonight!

And lastly, I just recently discovered Kristin and she is sooooooooo funny! I love when I see that she has updated. I don't even care if she has printables ... that is how funny she is. Haha!!
So those are some of my faves - only 4! Thank you again to Mechele - you made my day. :)
Posted by Jill at 7:04 PM

Email ThisBlogThis!Share to TwitterShare to FacebookShare to Pinterest
Labels: even and odd, math