Last night was the Open House for my school! I was super nervous although I had met a few families previously, but everything went very well! 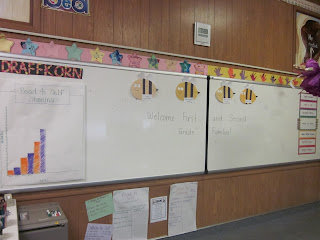 Out of my 12 kiddos, 8 families came! They were all very positive and excited about the room, and I got a lot of compliments on my BEE binders. I first heard about using them when I volunteered in a classroom in my old elementary school, and I loved how consolidated everything was. I took a copy of the BEE Binder explanation page to every interview I went on because I was so into it! So I was happy to know that the parents loved it too. :) 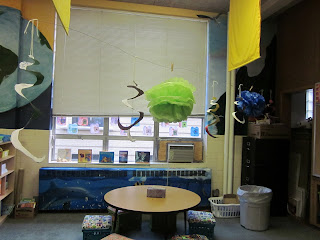 The morning of Open House I kind of panicked because I realized that I didn't have a whole lot of student work up... I mean, I have my Bravo board (thanks, The First Grade Parade!) and my little name mosaics outside, but I felt that it was a little devoid of other stuff. So in an attempt to clean out that black file cabinet you see in the corner, I found this OLD book about making cards with kids. The card designs were incredibly complicated and ridiculous, but I did find this pattern for a spiral card for Mother's Day, which I adapted to our mini science unit on hurricanes. After we studied hurricanes, talked about Hurricane Irene, watched a few hurricane informational and footage videos, and I ensured the kids a hundred times that we definitely will not have a hurricane, even though there are lakes nearby, the kids wrote facts about hurricanes on their spiral cards, backed them with construction paper, and cut them out. The kids loved them and they were SUPER excited to show their parents! Since they did it earlier in the day, they still remembered what they wrote... so I guess my procrastination paid off. ;) Here's a close-up. They turned out well! 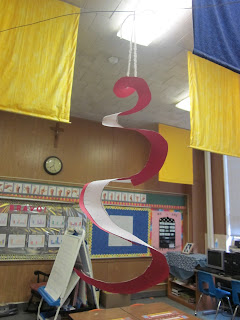 As part of our mini hurricane unit, we also acted out a hurricane.... because I don't know about other first grade classes, but my students NEED brain breaks like every 5 minutes! This was a good way to get them up and moving. And it reinforced the idea of the eye of the hurricane! 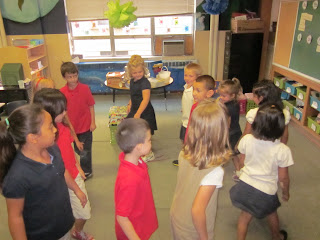 And then here's just some other stuff that I wanted to show! First, my "about me" board featuring my new sign from Miss Kindergarten's Etsy shop!! My girls just LOVE it and they keep drawing peace signs on everything. I'll add some more stuff as the year goes on but I think this is pretty good to start. 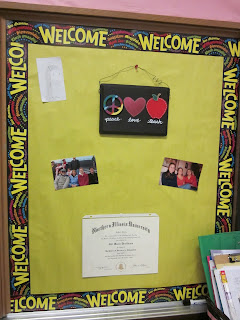 I don't think that I posted my jobs board yet. I got the sign from One Extra Degree and just printed it on bright paper. Then, I borrowed Mrs. Lemons's idea of using library pockets for my jobs and I just cut up cardstock and wrote their names. I haven't switched jobs yet, but I think I will on Monday. Some of the kids' jobs are kind of lame... I didn't realize that until after we started school. This is featured on the lovely side of my huge desk! 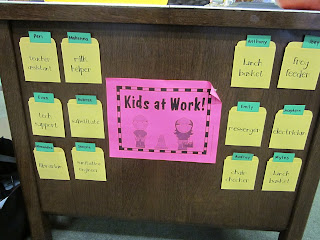 And, lastly, I dipped my little toe into the Reader's Workshop idea today inspired by the awesome Debbie Miller. Have you read City Dog, Country Frog yet? It's by my bff (in my dreams), Mo Willems. 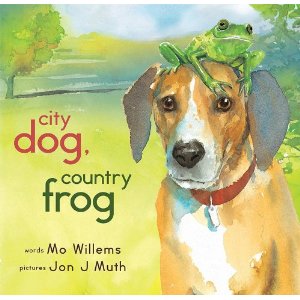 If you haven't read it, let me summarize - a dog and a frog meet up once a season and they just do their thing, playing around outside. When winter comes, the dog can't find the frog, and when spring comes around, the frog is still "missing" ... but the dog finds a new friend. It's a pretty heavy book, and I wasn't sure if my students would understand, but I had one friend who called out, "The frog's dead, you guys" when we were towards the end.

So, since we technically don't know what happened to the frog, we inferred together about what could have happened and why we think that - what evidence from the book or schema from our brains did we use to make those inferences? I was SUPER SUPER proud of my students for being so thoughtful! They came up with some really great ideas and some interesting ones, but they definitely were all thinking hard, so I had them kiss their brains. They just looooove that! :) 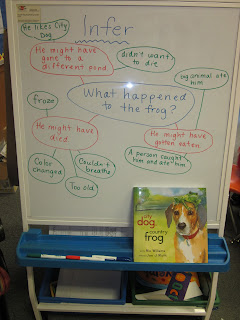 So that wraps it up! Thanks for sticking around until the end. :)
Posted by Jill at 10:47 PM