As I said on Facebook earlier today - I've never had a wedding, but I imagine that this Halloween party was pretty close. By that I mean that I planned forever for it, I hardly ate anything, and it went by in a flash!!

Today was my first ever Halloween classroom party. The only time I've been in the classroom for Halloween was 3 years ago during a clinical in college, so it was a whole new world for me today! I wasn't sure how much room parent help I'd have, so I planned everything but the craft.

I ended up having two parent helpers and one grandparent helper (two of which I wasn't expecting) and so everything was incredibly under control. 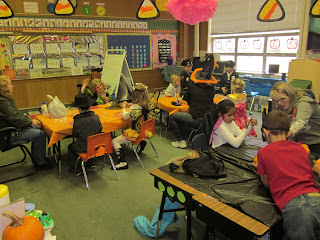 We did four stations. The first one was my room parent's craft that she thought of and brought everything in for (yay!). The kids decorated oranges like pumpkins with frosting. They also put a green pipe cleaner in the top to be the stem. They loved it! And tomorrow when the frosting has dried, we will have a delicious treat! 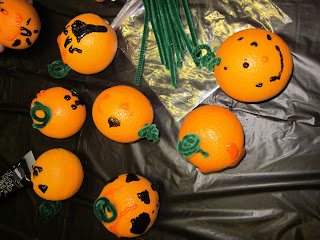 The second station was pumpkin playdough! My kids LOVE playdough, as you may remember from the first day of school, so I thought they'd like this. I got the idea for the pumpkin version from this post at Frogs, Bees, and Under the Seas. The kids loved that it smelled like pumpkin. And they were SO EXCITED when I said that they could take home their playdough balls. 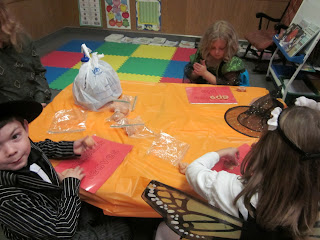 The third station was the Tricks and Treats game I got from Mrs. Bainbridge. This was another hit! One of my room parents ran this game so I did not see firsthand how well it worked but when I came around to tell everyone to switch stations, everyone leaving that station was beaming. I think it was the candy. :)

And last, we did the Jumping Like a Spider activity from The Wise and Witty Teacher. We weren't able to get through all of it (because the other stations went so fast thanks to my awesome helpers) but I think it was good for the kids to get up and jump around for a while! I found out that I have some future Olympic long jumpers in my room!! 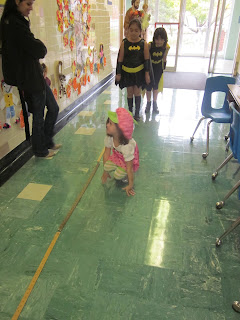 And let me tell you about the food situation. My one room mom had been talking to me and she said that she was going to bring mostly healthy food and one treat. I said, "Great!" It was surprising to me when, this morning, I had THREE students bring in cupcakes. Three!!!!!! Way too many cupcakes, people!!! Luckily, my room mom brought tons of good food to make up for it (I hope). I just wanted to eat the whole table!! 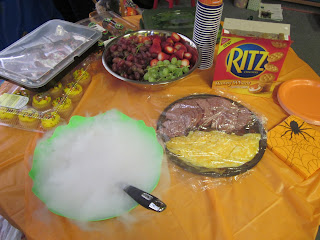 And how about that steamy punch??? That was definitely a highlight. Yay room moms!! 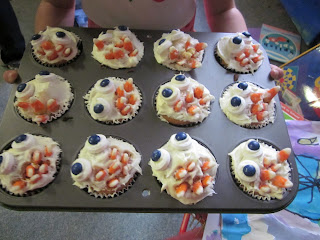 One last picture - we have a set of three siblings at school, and one's in my room. They all brought super cute and creative cupcakes. Here is my student's cupcakes!

I wish I could show you all the cute costumes! I had a few Batwomen, police officers, and butterflies. I also had an AWESOME Cleopatra, complete with heavy makeup! Loved it.

So I survived my first party! And I'll definitely do party stations like that again in the future. :) How was your Halloween?
Posted by Jill at 7:27 PM