What We've Been Up To

I wanted to share today some fun things we have been doing in our classroom! It has been a rough week (I seriously need a classroom management coach...... it is ridiculous), but I have labored on!

I mentioned yesterday that we did the reading response for the Ugly Pumpkin. I remembered to take pictures today! Here were some of the highlights. It was so hard not to die laughing at their writings.... I knew they were sad events but they wrote them in such a funny way! 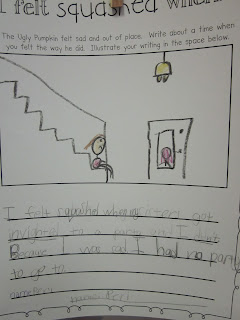 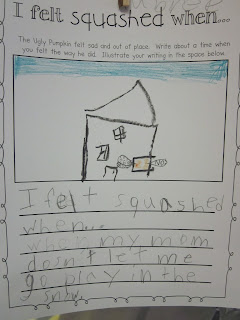 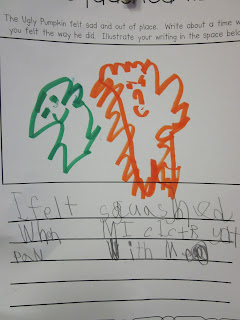 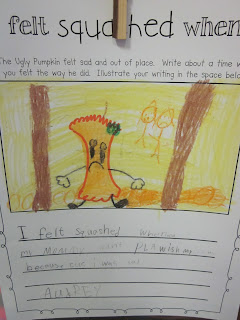 We also made the math turkeys that I saw on Fun in First. I let the kids pick their own numbers - first graders picked 2-10 and second graders picked 10-20. Each feather was a different representation of their number. We did... word form, expanded form, tallies, a picture, an addition sentence, and a subtraction sentence. They seemed to like this! However, if I were to do it again, I would tell them that they couldn't pick the same number that I picked... I had a ton of first graders pick 8 like I did, and they just copied off of my sample. Not the intention of this activity... oh well. You live you learn, I guess! 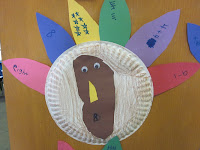 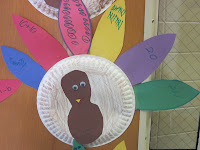 In first grade, we've been learning /sh/, /ch/, /th/, and /wh/. We just did /wh/ today, actually. Yesterday, I reintroduced these digraphs as Letter Teams, and we talked about how they have to be together to make the sound. Then I made an impromptu chart paper poster and told the kids that when they saw a word with any of our letter teams in them, like when they were reading, they could go over and add it to the chart. I didn't think this would be quite as exciting as it was, but OMG, they lost it every time they found one of the letter teams. I don't think the chart lasted longer than an hour before it was packed with words. Also it got a little packed with decorations. I guess we need to talk about that! 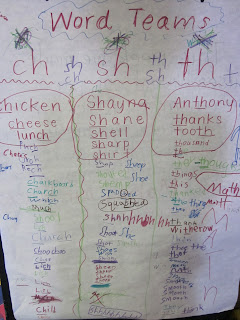 And let me leave you with a little funny. So every Friday we go to Mass, and a student from each classroom is responsible for coming up with a petition, or something to pray for, and going up in front of church and saying it into the microphone. Up until this point, I've only had second graders do it, since I know they can read (since I write down what they want to pray for so they don't forget when they go up there). But today I asked one of my higher first graders if she wanted to do the petition, and she said sure. So usually I write the kid's name on the board so that on Friday morning I don't forget to remind the kid that it's their day. She did me a favor and wrote her own name on the board along with her invented spelling of "petition." 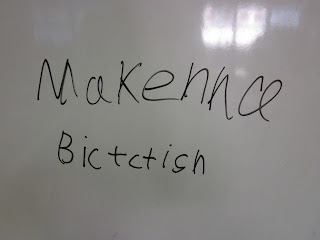 I love first graders.
Posted by Jill at 9:10 PM