So 100th Day sort of threw us off... and Chinese New Year... but we really are studying our government! Today we learned about our leaders. We talked about community leaders, state leaders, and country leaders.


I asked if any of them recognized Arnold from anywhere and they just looked at me, puzzled. Five minutes later, one said, "Um, isn't that the guy from Kindergarten Cop?" Yes, my friend, yes it is.


We made a foldable type of thing to help us remember our leaders. I don't know if it really counts as a foldable per se since no folding actually occurred. Regardless, it was a type of graphic organizer and the kids loved it! 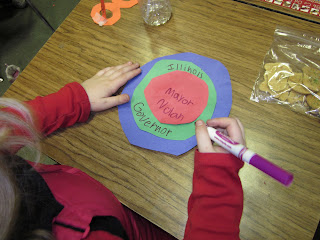 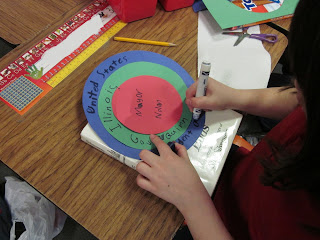 
They took their bullseyes home today to teach their parents about our leaders! Although I found one on the floor after school..... boo.

Tomorrow we learn about elections! I'm excited to push a read-aloud into Social Studies - check back tomorrow! :)
Posted by Jill at 11:13 PM